
 
1 of 39 Photos
 View Large Images


Porsche Gold Coast is proud to offer this 2016 Porsche 911 Carrera GTS Rennsport Reunion Edition: 7 Speed Manual Transmission, Finished in Fashion Grey with Black Alcantara Interior. Entire car is wrapped in clear film. Annual service completed
111 point inspection; Porsche Certified (CPO) Warranty which will start at the time of delivery and run for 2 years  with unlimited mileage.
Built to celebrate Rennsport Reunion V at California’s Mazda Raceway Laguna Seca, Porsche created a limited-production model of its 911 Carrera GTS coupe. Appropriately dubbed the Rennsport Reunion edition, 25 examples were built and quickly purchased by collectors as soon as they were announced.
Conceived by the late Bob Carlsen, then head of Media Relations for Porsche Cars North America and former Porsche factory driver and well-known vintage racer Brian Redman, the pair believed that a gathering of like-minded enthusiasts centered around Porsche’s most iconic road and racing cars could be successful. Choosing to host the first Rennsport Reunion at Lime Rock Park, Connecticut, in July of 2001, the event quickly became a mainstay in the Porsche community. The second and third Rennsport Reunions were held at Daytona International Speedway in 2004 and 2007, and then relocated to Laguna Seca in 2011, 2015, and most recently 2018. All six events have proven tremendously successful, drawing hundreds of entrants and thousands of paying spectators.
Each Rennsport Reunion GTS coupe was painted Fashion Grey – a paint-to-sample color well known to enthusiasts that dates back to the 356 – and further outfitted with black and red stripes on the doors, roof, hood, and rear decklid. Inside, the black interior features both leather and Alcantara. Optional extras include the desirable 18-way adjustable sports seats and an upgraded Bose stereo system. Further differentiating it from other GTS coupes, the dashboard and door-sill covers are finished in carbon fiber and boast Rennsport Reunion Edition identification. The Rennsport Reunion logo appears on the center console. The Sport design steering wheel, door panel trim, floor mats, and both seat headrests are all stitched in contrasting Carmine Red, a color that also appears on the seat belts and tachometer face.
This vehicle is proudly offered by Porsche Gold Coast, an Exclusive Manufaktur Partner, Porsche Classic Partner & Authorized Porsche Dealer, Located on Long Island New York.

What is a CARFAX Vehicle History Report?
Millions of consumers rely on CARFAX Reports every day to help them decide whether or not to buy a used car. Each report contains information about whether the car in question has been in an accident, has any open recalls, previous owners, service history and much, much more.
View Free History Report
Options
Basic Information
Engine
DriveTrain
Suspension
Instrumentation
Roof and Glass
In Car Entertainment
Seats
Convenience
Comfort
Features
Safety
Dimensions

Apply Now
Secure Credit Application
Applying for a vehicle loan online is one of the quickest and easiest application methods. Our secure application is easy to complete, all you need are a few personal and employment details. 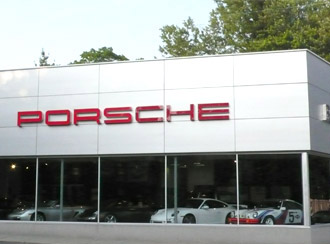 We make every effort to present information that is accurate. However, it is based on data provided by the vehicle manufacturer and/or other sources and therefore exact configuration, color, specifications & accessories should be used as a guide only and are not guaranteed. We are not liable for any inaccuracies, claims or losses of any nature. Inventory is subject to prior sale and prices are subject to change without notice and cannot be combined with any other offer(s). The price for listed vehicles as equipped does not include other charges such as: License, Title, Registration Fees, State or Local Taxes, Smog Fees, Credit Investigation, Optional Credit Insurance, Physical Damage of Liability Insurance, Delivery Fees, Finance and/or Documentation Fees. Any and all differences must be addressed prior to the sale of this vehicle.